Showing posts from February, 2019
Show all

Nicholas II, Alexandra, Maria, and their servants are on their way to Tyumen to get on the railway. The fastest way to get to Moscow from Tyumen was to ride the train west, but that would take them through Yekaterinburg, a large city in the Urals, full of communists. The Ural Soviets were based in Yekaterinburg and they were baying for the Romanovs.


Yakovlev opted to take the railroad east to Omsk, there to transfer to a westbound train and bypass Yekaterinburg. But since Yakovlev's intentions remain sketchy to this day, nobody actually knows if he intended to bring the family to Moscow or to escape to Japan or to do what actually happened:

The Omsk Soviet handed the Romanovs over to the Ural Soviet. Four days later, on April 30th, the Romanovs arrived in Yekaterinburg. After a thorough inspection--Maria wrote to her siblings back in Tobolsk that the soldiers rifled through everything even "the candy" and "the medicine…
4 comments
Read more 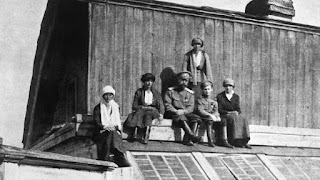 The Romanovs are in Tobolsk, in a remote part of Siberia. They aren't allowed to walk about the town on their own and are usually confined to a fenced-off portion next to the house. They are allowed to venture under guard to church, though.

Because Tobolsk was so remote, it took a few weeks for the news of the Bolshevik coup to reach them--especially since it was winter and the river nearby was frozen. According to Sydney Gibbes, the childrens' English tutor, Nicholas was "depressed" after hearing the news of the Communist uprising. If he had any sense that he and his family's safety was in danger, we don't really know. Nicholas's diary from 1917 has been published but it's not particularly interesting or illuminating. 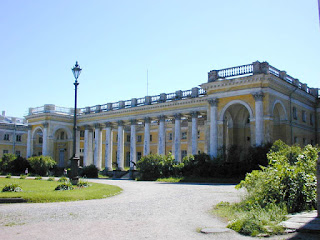 Last time on the Romanovs...

Nicholas II, former Tsar of all the Russias, has abdicated and finally arrives home to the Alexander Palace.
Nicholas returned home to be placed under house arrest.
No longer the tsar, he was addressed as "Colonel Romanov" or
"Citizen Romanov."

There were guards stationed all over the palace, though the family was allowed to live fairly normally--the children's tutors had stayed on, so they were kept busy--there were still servants around--but their movements were restricted. Alexandra could not sit on her balcony. After a while, her visits to church were curtailed.

On the advice of her friend Lil Dehn, who was in the palace with the family, Alexandra had been burning her diaries and some of her correspondence, especially her letters with her father and brother, since the Provisional Government was suspicious that Alexandra was pro-German and had been committing treason against Russia.

- February 12, 2019
I cannot believe it's been ten years since I essentially pulled an all-nighter, made an account on Blogger, and wrote my first blog post. At the time, I just wanted a central Internet place to post a story I was working on so my friends could read it at the same time. That was it.

Happy 10th Birthday to the blog!!

In 2009...
-Blogging was pretty popular
-Twitter was brand new
-Oh hey, YouTube! Vlogging? Like a video diary? Huh. Interesting.
-Kindles and other ebooks were also still fairly new
-Publishing was supposed to sink into a hole and die as an industry (I was about two months out of publishing grad school when I started this blog and literally, that's all we kept hearing in grad school)

In 2019.... -Blogging is not as popular. It's been replaced by podcasts, Tweeting, Snapchat, more YouTube videos, and yelling at a robot in your house who is collecting all of your information and your conversations so it can kill you in the night
-Twitter …
10 comments
Read more

Okay, so as stated in a past post Stately, Country English Houses, part of my latest Plot Bunny involves a smallish country house built in the Victorian era. The house belonged to an old woman, who inherited it from her parents. Now, the old woman's family is trying to decide what to do with the house. Do they try to build up a case to get it listed in the register of historical buildings? It's not old enough to be automatically listed, so they need to show it has historical significance.

Or maybe they'll turn it into a business venue or some type. Either way, the task is left to my contemporary hero, Liam, a half-Irish, half-English thirtysomething year old man. This is his mother's family, the side he's not very close to, having been raised in Ireland by his dad after his parents divorced. Liam has always perceived his mum's side as being secretive, but when asked by Mum to help clean the house up and hire an architect, a decora…
2 comments
Read more

It's time for IWSG Wednesday. The Insecure Writer's Support Group posts their writerly insecurities out to the world every first Wednesday of month! Check out the group here.


Besides writing, what other creative outlets do you have?

But then there's blogging, which is writing, but wayyy looser, at least for me. I've never kept a regular schedule on the blog nor have I only stuck to a narrow set of topics 'cause I'm a rule breaker like that.

I like to cook and bake--I don't cook as often as I'd like and my cooking skills are still fairly limited--as is the size of my kitchen--but I do enjoy both when I do them.

Sometimes I like to scrapbook. I have a stamp collection my grandmother left me and just last week, my mom and I decided to make a little collage with some of the st…
18 comments
Read more 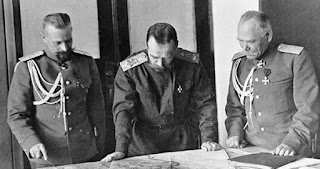 
1915: Nicholas II is at military headquarters, commanding the Russian army. He's left his wife Alexandra in charge of the governing of the empire. Alexandra hates Nicholas's ministers, appoints her own ministers (at the advice of Rasputin), and the extended Romanov family pick representatives to approach the emperor and empress to give them interventions in the whole matter of Grigori Rasputin--and the peril they thought the country was in. There were cousins planning coups, for goodness' sake.
Mind you, this is going on while the Russian army is cannon fodder in WWI and unrest is churning at home.
On December 30, 1916, Rasputin was invited to the Yusupov Palace, home of Prince Felix Yusupov, husband of Tsar Nicholas's niece. Also, Prince Felix is ridonculously rich. Richer than the Romanovs kind of rich.
Anyway. Felix has Rasputin over. Felix and several other men are there, including Grand Duke Dmitri Pavlovich Romanov, a…
4 comments
Read more
More posts