Showing posts from January, 2019
Show all

It's occurred to me that there are probably people who aren't familiar with the Romanovs and since I recently saw Anastasia on Broadway, read a novel a few months ago which was an alternate history of the Romanovs, and yes, the FrankenIdea has a Romanov-related strand in it, I may as well blog about 'em.


What follows is a grossly oversimplified version of the Romanov history:

The Romanov dynasty ruled Russia from 1613 until 1917. The dynasty had famous rulers like Peter The Great, Catherine the Great (who actually married into the family) (and her son may not have been the biological son of her husband, so the descendants may not have been bloodline Romanovs, but her husband wasn't a male line Romanov anyway, so...), Alexander II (Nicholas II's grandfather, who freed the serfs and was bombed to death) and other tsars.

Tsar, by the way, is derived from Caesar. Means emperor. Because that's what they were, Emperor of all the Russias. 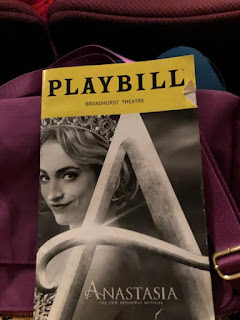 Tonight I went to see Anastasia The Musical! I've actually been wanting to see the show for a while, but kept putting it off, figuring I already knew the actual history of Grand Duchess Anastasia and her family and I knew the animated version from my childhood.

I've had a fascination with the Romanovs from about junior high school--probably just after the animated film came out. There's power, excessive wealth, romance, tragedy, a mystic, mysteries, and for a long while after, a possibility that maybe, just maybe, one of the children escaped the slaughter in Yekaterinburg in 1918.

We know now that all of the Romanovs and the servants who stayed with them in the House of Special Purpose died in 1918 and that their remains were in two separate graves, one of which wasn't found until after the main grave.

Anastasia The Musical, though, takes that sad history and gives it that "what if?" hopeful possibility. There have been other film versions of the story--and th…
2 comments
Read more

I was incredibly hesitant about applying for the library science program, since I already have a master's degree which I did precious little with. But after months of consideration and asking questions and reading, I decided to take the p…
3 comments
Read more

My plot bunny--which has been hopping around since about October, I think--is sort of shaping up to be a historical fiction/alternate history/contemporary dual storyline/time slip/romantic elements kind of mishmash thing.

As my friend Krystal Jane Ruin says, it's turning into a FrankenIdea.

I don't have a ton worked out about said Plot Bunneh--I don't even have characters' names yet--but I do know that the story revolves around an English country house. Or stately home, if you prefer. I'll go with country house because I don't think the house in my Plot Bunny is a huge palace-like mansion which is what "stately home" says to me.

Part of being a period and costume drama nerd are the buildings that those dramas take place in and sometimes, those buildings are beautiful, rambling, grand old homes nestled in the English countryside. It might be because I'm a history nerd or because I've read too many novels where characters have estates with coun…
4 comments
Read more

With a new year, there come some new things and then old things, right? A person and their circumstances don't change at midnight on January 1st. But still, it's nice to think we have another 365 days to have adventures, be inspired, be creative, and get more writing down.

2018 was not a great writing year for me. In total, I finished two short stories, started a third that I dropped midway, started a creative nonfiction project that I shelved, and started writing a book I'd meticulously planned out, only to feel that it lacked soul--though I do intend to go back to it, since I still think a lot about the characters and their world.

I also have another plot…
12 comments
Read more
More posts