Moulin Rouge! The Musical at the Emerson Colonial Theatre

- July 24, 2018
Last time, I wrote about how fandoms converge and how weird that is. It almost feels serendipitous. I have a lot to say overall about my weekend in Boston--because Boston when it's summer and sunny and you are over drinking age with a credit card is very different from trudging through Boston in two feet of snow in the biting cold in college.

But though Boston and I have changed in the eight years since I was last up there, I have to say that my on-foot knowledge of downtown Boston has served me in good stead--I'll cover more of what my friends and I did and saw in Boston in subsequent posts.

But first! Moulin Rouge. We were greeted with it from the second we got off Amtrak at South Station and we kept seeing ads for it all over Boston, which was exciting. 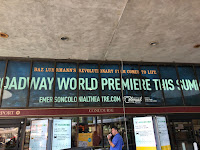 Although the Colonial Theatre was smack in the middle of my college "campus," I never went inside or had classes in the building. I remember sitting in the Tufte Performance and Production Center, which goes behind the Colonial Theatre and has big windows and seeing the touring cast of Spamalot wave because we could see them running up and down the stairs to get to their dressing rooms one night.

Emerson College, my alma mater, bought the Colonial and there were rumors for a while that the College was going to tear the theatre down or make it into another dorm (like a lot of smaller urban colleges, Emerson's dorm space is tight). But instead, they renovated it and like the Cutler Majestic and the Paramount Theaters, there are professional productions up at each place. Moulin Rouge is the first production up at the Colonial since its renovation and reopening. 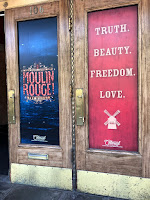 You can learn more about the Emerson Colonial Theatre here.

It's gorgeous in the theater, by the way. "They're going for a Versailles thing, huh?" I said to my friend Nali at one point as we were waiting for the auditorium doors to open. 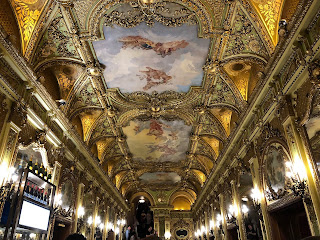 "Especially with all the mirrors," she replied.

Then we went up to the mezzanine to our seats and we were stunned at the set.

Look at that set. 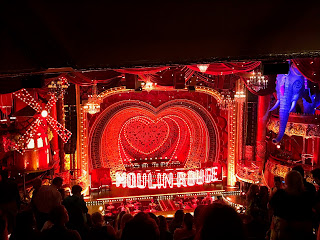 The windmill moved, guys. There's an elephant sticking out of the balcony. We had to take pictures of it from our perches in the back mezz. As other audience members walked by to be seated, we could hear them react to the set as well.

There was also some VIP seating at the very foot of the stage with tables. We wondered if they would keep that when the show transfers to New York.

The movie came out in 2001 and it's based on archetypal operatic tragic love stories--the musical hews closely to the movie's plot. The characters are pretty much the same and all of that translates well to the stage. It has that musical plot already from the film and it absolutely works.

The music is different though. They've added pop songs that were not in the movie to the stage version. Moulin Rouge is kind of the ultimate jukebox musical, right? I mean, the movie was that and the audience would know to expect that style. Some of the song choices were unexpected. My friend Nali and I were punching each other whenever a song we'd liked was sung on stage. For the most part, the songs worked in moving the story along and expressing character and feelings'n'shit. They were just...unexpected in some places and in some choices.

After we were all back at our hotel, I was like, "Did I just see a musical or was I just at a concert?"

This being the first out-of-town tryout any of us have ever attended, we're not sure how much the show will change between their Boston run and their upcoming-sometime-in-the-next-season Broadway run. We're looking forward to seeing it at home and to see what, if anything, the production tweaks. We doubt the music will change very much though because of music rights and licensing and whatnot. But the presentation may change.

The two big numbers from the movie, in my mind, are "Come What May" and "Roxanne."(Or am I just saying that because those are the songs Virtue and Moir used in their free dance?) "Come What May" was glorious. The combination of Karen Olivo's powerful belt and Aaron Tveit's earnest and strong vocals gave me goosebumps. They sound amazing together, holy shit.

And "Roxanne." Woo. "Roxanne" is a Dark Moment song in the plot so there's angst and jealousy and anger. And no shit, but Aaron Tveit was fucking growling "Roxxxx-annnnnneee." It took me a second to realize that he was the one singing it and singing it that way, which is so different to his usual vocal style. I think I turned to my friends during that number and I know Jess was as open-mouthed as I was.

There was also a big Acting Moment for Aaron's character at one point--it's directly from the movie, so everyone there probably knew it was coming, but people gasped and reacted like "Omg, no!" which is a testament to the emotions in the show and to the actors.

I cannot wait for the show to come to Broadway, but it was incredibly special to be able to see it in Boston. My friends and I felt that we leveled up in our mutual theater geekdom by seeing an out-of-town tryout run and a world premiere, to boot. 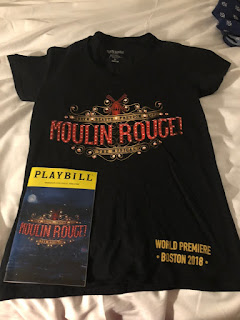