Showing posts from July, 2018
Show all

Moulin Rouge! The Musical at the Emerson Colonial Theatre Last time, I wrote about how fandoms converge and how weird that is. It almost feels serendipitous. I have a lot to say overall about my weekend in Boston--because Boston when it's summer and sunny and you are over drinking age with a credit card is very different from trudging through Boston in two feet of snow in the biting cold in college.

But though Boston and I have changed in the eight years since I was last up there, I have to say that my on-foot knowledge of downtown Boston has served me in good stead--I'll cover more of what my friends and I did and saw in Boston in subsequent posts.

But first! Moulin Rouge. We were greeted with it from the second we got off Amtrak at South Station and we kept seeing ads for it all over Boston, which was exciting.

Although the Colonial Theatre was smack in the middle of my college "campus," I never went inside or had classes in the building. I remember sitting in the Tufte Performance and Production Center, which goes behind…
4 comments
Read more

When Your Worlds Converge: Moulin Rouge!

You know how sometimes you're interested in or are a fan of various seemingly unrelated things? And then somehow, those things converge and it's awesome but kinda weird, too?

1) The movie Moulin Rouge! This bizarre, colorful, dramatic musical with famous pop songs, telling the story of a poor English poet named Christian and his love story with the star of Montmarte's Moulin Rouge club, Satine, came out in 2001. I don't remember when I first saw it, but it was probably in college. I loved it. I was all about the garret-living consumptive Parisian writing lifestyle when I was 18.

2) I like theater. I went to a college with a large theater program. I came out of college and back home to New York City... where Broadway is. Meaning that I've been lucky enough to be in close proximity to some truly amazing shows with amazing performers.

3) An amazing Broadway performer I've not been lucky enough to see in a Broadway show, ironically enough, is Aaron Tveit. The first…
4 comments
Read more

Welcome back to Downton! We’re thrilled to announce that #DowntonAbbey is coming to the big screen. Film production begins this summer. pic.twitter.com/3scMUmosic — Downton Abbey (@DowntonAbbey) July 13, 2018


You may have seen me squealing about it somewhere on the social media.
Anyway, I didn't think they'd get to a Downton Abbey movie this soon--the show hasn't been off the air that long.
I expect the production to be pretty tight-lipped about plot and whatnot, but:
-The series finale ended on New Year's Day, 1926. So is it picking up from there? Is it skipping time?  -How many of the cast will be back? It's a huge cast.  -Seriously, the Dowager Countess is still alive? Isn't she like 140 years old by now? 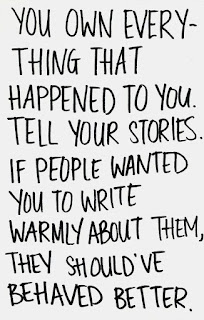 I've started writing a creative nonfiction project which I hope can be self-published by the autumn. But I've decided already that I'll be publishing it under a completely different pseudonym, for reasons.

As many of you know, the name I write under--Michelle Athy--isn't my legal name. Michelle is my middle name. Athy is my real last name. I write under that name for a few reasons. I don't like my real first name, it's too distinctive. The name is part of my real name but different enough that it wouldn't cause issues in Real Life.

I'm hardly an established author by any means, but I have written stories in different genres already and they all used my author name--and most of the things I'm working will be published under Author Name, whenever that may be.

It's time for the Insecure Writers Support Group post, one day earlier than usual because the first Wednesday this month is the day us Americans eat too much and shoot explode-y things off in the air.
Getting on to the July IWSG question:
What are your ultimate writing goals, and how have they changed over time?
Well. How haven't my writing goals changed over time? I've referred to myself as a "recovering writing major" a few times because at least at my college, the Writing program was very focused on literary fiction. And while I knew I didn't fit in to that whole thing--there was no way in hell I was MFA-bound--I did still have that weird fog of wanting to write the Great American Novel.
That's gone now.
I always wanted to write novels and I was always a bit frustrated in workshop classes because we only ever wrote short stories. Well, I still want to write novels, but I seem to be writing short stories these days and I'm totally cool with that…
14 comments
Read more
More posts