Showing posts from March, 2018
Show all

Peaky Blinders and My Outlining Style 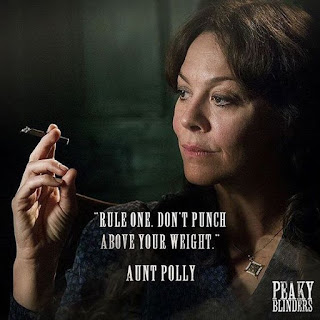 I haven't really been writing very much in the past couple of weeks--not much time to--but I have a new approach in mind for a short story I've been tinkering around with. I think it's because my dad and I started watching Peaky Blinders on Netflix the other day (we haven't finished season 1 yet, so if you've watched it, no spoilers!)

It's kind of a dark, violent drama about a gang becoming a crime family in post-WWI Birmingham, England, with lots of men with bad haircuts. But it's really compelling and the lead character, Thomas Shelby, is an anti-hero.

Peaky Blinders literally has zero to do with the short story I've been working on, but it is a darker creepy short (more "Haunted Lake" then "When Mary Left," though that wasn't rainbows and puppies either) and I'd been thinking that for a short story, it wasn't getting to the crux fast enough.

I have finished my first ten books of the year! Here they are:

- March 11, 2018
Last Monday, I received a really sweet email from a blog reader who said that some of the sources I had listed on my Blog Roll page helped her writing group students with this month's genre assignment of "historical fiction" !!

But that email made me go take a look at my Blog Roll page. Some of the links are totally helpful for research of various kinds, but it's all Internet-based and they're not necessarily all geared toward researching for historical fiction.

So then I decided to go through nine years of blog posts (nine. years. I feel old) and organize them onto one page--the new Research page. Any research-y post I've written about the Regency or the Victorians is linked on that page, along with a list of books I've read, whether it was for research or for fun. Everything is divided by centur…
2 comments
Read more


Hey y'all! I must tell you briefly about an outing I had with my two besties, my usual Broadway partners-in-crime. I think this is my first Broadway show of the year, in fact--and it's kind of a different one, since Lobby Hero is a play and not a musical. Written by Oscar winning screenwriter Kenneth Lonergan (Manchester by the Sea), Lobby Hero also marks the Broadway debut of Chris Evans aka Captain America aka one of the Men I Google-Stalk the most often.
Gah! He was on stage and everything, guys.
The play also stars Michael Cera, Brian Tyree Henry, and Bel Powley. Basically, it takes place in a Manhattan apartment building's lobby, where Michael Cera's character is a graveyard shift security guard/doorman and subordinate to Brian Tyree Henry's character. Bel Powley is a rookie New York City cop and her partner is the older and somewhat shifty Bill, pla…
2 comments
Read more

Hey, hey. It's time for IWSG in March! The Insecure Writer's Support Group is a network of writers and we post about our insecurities and writing on the first Wednesday of every month. Come check out the group right here.
This month's question:
How do you celebrate when you achieve a writing goal/ finish a story?

Umm...I'm not sure if I do? I've given up on two projects in the last year alone, so I'm climbing the mountain on an outline and trying to sort of write a creepy short story that I keep putitng on hold because I have a limited amount of time to write.
But at the end of a story or finally finishing that chapter or finally figuring out the key to a character's journey--how do I celebrate?
I breathe a sigh of relief and move on to the next thing.
7 comments
Read more

- March 01, 2018
How is it that in all my yapping about the romance genre, I've never talked about romance tropes?

So, my fave tropes to read?

In historicals, I love a good marriage of convenience story. It's not a plot device that really works well in contemporary stories, but in Regency stories, it's entirely possible to have a hero and heroine who have to get married to inherit something/keep something/stop a scandal from erupting/give a child a father/stop the heroine's evil uncle from marrying her off to someone el…
6 comments
Read more
More posts