- July 15, 2017
Not very long ago, writing buddy Krystal wrote a post with the opening lines of her older writings and they were raw and often hilarious.

Recently, as I've been going on a cleaning binge, I piled a lot of writing-related stuff in one place.

(Note: should I ever warrant it, those things would probably comprise "my papers.") 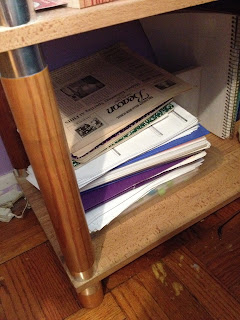 It's a mix of stuff from elementary school through to post-graduate, most of it fiction, most of it unfinished.

Here are a few opening lines from a few key pieces:

Everyone was coming. All of Kit's relatives, her children, her grandchildren, and her three great grandchildren. The family always gathered for Christmas and Thanksgiving and some Easter Sundays too.
But they also gathered on April 15. Then Kit could say why. Her brother and sister had died on this date 84 years ago.

Err...holy run on, Batman! I *think* this was the first draft of the longer version of Book the First. However, the sentiment expressed still stands. The subway is NYC's lifeblood and yet it's often so badly run that it's an exercise in patience to use it.

I knew this wedding was a bad idea from the moment I got that damn invitation. I stomp out of the restaurant to the sidewalk, stalking away from the people inside. My heels make sharp, exacting sounds against the concrete.

Not two steps later, it becomes obvious that the dress I'm wearing is too thin for a Boston September night .

The schooner was making good time; another week or so and the vast, empty Atlantic would become the verdant west coast of England.

--The Keegans of Banner's Edge, draft one

As Miles Keegan laid eyes on the English shore, he wondered if he was doing the right thing.

I am not going to go over the million incarnations of this particular book, because seriously. So. Many.