- May 31, 2017
I've been a reader of romance--specifically, historical romance--since I was a teenager. And though I know that romance is a big category and it sells really well, I hadn't really ever looked into the numbers.

And since what I'm writing might be a historical romance (or is it a historical with romantic elements?), I thought I'd noodle around on Google and see what I could find.

Romance as a genre is worth $1.08 billion, which is something like one-fifth of all adult book sales. It's the size of the mystery genre and sci-fi/fantasy combined. According to the Romance Writers of America, in 2014, women made up 82% of romance readers. Most romance readers are in the 30-44 age range.

Romance novels are not uniform. Clearly, they fall under different subgenres, each with its own conventions, but they all focus on the love story first and foremost and offer a happily ever after ending.

On Amazon, as of 2015, for the Kindle, historical romance came in at #3 with 29,536 ebooks available. I ran a search in the Kindle bookstore "historical romance" and it gave me 400 pages of results, so...I'd say that number's likely gone up. 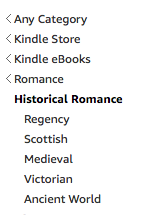 So, notice that the first setting or time period what-have-you under Historical Romance is Regency.

I've talked about the historical Regency era a lot on the blog. The Regency took place from 1811 to 1820 and was the sliver of time when George, the Prince Regent, ruled for his mad father George III. (The overall historical period is the Georgian period). This time period not only was a time of elegant Empire dresses, Jane Austen, and carriage rides, but it was also a time of warfare (Napoleon vs. everyone else in Europe, until he was defeated at Waterloo in 1815), the War of 1812, and unrest in Britain as well. The Industrial Revolution was beginning, the Luddites went around breaking new machines, people wanted a new social order...

But because Jane Austen was writing about her own time and her own social class, we have six novels about young women navigating their lives and finding love. Her novels influenced writers in the 1830s, including William Makepeace Thackeray with Vanity Fair and Charlotte Bronte with Jane Eyre (which is actually supposed to take place in Regency times, not Victorian times, which is when it was written).

Georgette Heyer took this time period and turned it into the Regency subgenre. Her novels are well-researched (though, admittedly, some of it is more influenced by Heyer's Edwardian perceptions of the Regency than the actual Regency), witty, with great dialogue and wonderfully romantic.

In romance, there's the category Regency (category romances are what Harlequin is known for, usually part of a line or a series), which are shorter, more focused on the dialogue and the wit, and the comedy of manners, and the Regency historical (usually single title): darker, longer, sexier, and the catch-all term for anything in the 1790 to 1830sish date range.

Britain, I think, continues to be the most popular setting for historical romances, though that is beginning to change with more authors self-publishing or finally being allowed to write historicals set in the twentieth century.

And let's not talk about how many of them are about dukes. It's ridiculous. Dukes are the top rung of nobles in Britain, so they represent wealth, power, influence, and fame in a nineteenth century setting.  But I'm...not a fan of the ubiquitous hero duke.

There are only 24 non-royal dukes currently alive today. 24! There were not hundreds, not thousands, of hot, badboy, single, in their 20s/30s/40s dukes running around Britain in the eighteenth and nineteenth century. It gets seriously repetitive. Can we stop with the duke books, please?

Thing is, as we all know, publishing as a whole has a diversity problem and in particular, historical romance has a lot of authors and readers who are all, "But it takes place in 1810 and you want Indian/black/gay protagonists? In England?" (Which is less problematic than people who go, "But I don't wanna read about middle class people in my historical romance." Really?) Or the idea that setting something outside of England doesn't sell, so it doesn't get written or published.

But it's in these areas that self-publishing can definitely improve the available choices. But I think trade publishing may be catching on, I can only hope. I mean, of the last two historical romances I read, one was set in 1779 Revolutionary Era New York (with British characters, so it was the American Revolution from the other vantage point) and the other (my first 5 stars of the year, by the way) was set in Civil War era Virginia, starring a black female spy undercover in a Confederate Senator's household, and a Scottish-American spy, also undercover as a Confederate officer.

What Are the Most Popular SubGenres in Romance?
Class Differences in Historical Romance
Let's Talk About The Importance of Being a Duke
Accumulation: Or, the problem with too many dukes