And by the hinterlands, I mean western Kanagawa Prefecture. We got on a train with wide windows in Tokyo and rode it for about three hours.

Hakone--which I didn't know a thing about before this trip--is a town in the mountains, mostly within the bounds of the Fuji-Izu-Hakone National Park and is famous for its abundant hot springs, its mountains and Lake Ashi (Ashinoko)--plus, there's some historic significance, because in the old days of shogun and samurai, Hakone was a major checkpoint on the road to Edo (present-day Tokyo).


We went to Hakone for an overnight. Our first stop on the way to our hotel was for lunch--I'll go into the soba lunch in a later post--but the restaurant used to be somebody's wife's house in the Meiji Era. We got off the train at Hakone-Yumoto Station, took cabs which took us through a small town's downtown area up some very winding (but paved) country roads (Japanese drivers are the best damn drivers ever, seriously), and waited a few minutes outside this place in the pouring rain.
After lunch, we got lucky with another cab, went back to the train station, and boarded a smaller train  which took us futher up into the mountains to Gora, where we boarded a bus to get to our hotel. It wound up and up a mountain. Hakone has several art museums, a botanical garden, and other attractions, but we opted to go to our hotel and relax.

We took this little trip-within-a-trip about five days or so into our overall Japan trip, so I was amused to find plenty of European, Asian, and presumably American tourists lolling around Gora waiting to board buses bound for different hotels around Hakone. I have to say, I think those people were enterprising because there weren't an abundance of English signs around Hakone to help a non-Japanese-speaking or non-Japanese-literate person out.

Our hotel had onsen (hot spring) facilities, which is the area's main attraction, but my family aren't really onsen people; that is, in Japan, onsen is a communal nudist bathing experience. You take off your clothes. You wash your body. You rinse. You get in the onsen and relax--with people of the same sex, but strangers all the same. My aunt's friend, who played tour guide for us over so much of the trip, loves onsen. She and my aunt (after some persuasion) used the onsen. The rest of us took hot baths in our hotel bathroom, after a very delicious dinner out.

It was good that it rained that day, actually; it gave us all a chance to stop for a few hours and rest and be one with our slight jetlag.

The hotel also had onsen foot baths, though, which I used (along with the massage chair--heaven!) the next morning. 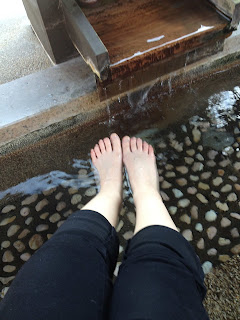 Then we went sightseeing in Hakone, a completely different venture from sightseeing in Tokyo (which actually happened the day after we returned from Hakone). We hopped a bus which took us somewhere else around Mt. Hakone. We noticed a lot of steam rising off the slopes of a mountain, because of volcanic activity in the area, which is how the onsen are heated and abundant and all that. 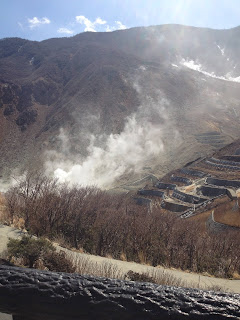 And then the bus parked in a parking lot and we looked across at a very familiar mountain.
I was beaming. I knew we were relatively within the vicinity of Mt. Fuji and that we might catch a glimse of it, but to get such a bright, clear, full-on view of it was breathtaking. Mt. Fuji, is, of course, the most famous Japanese mountain, but also the highest and is depicted in art, literature, poetry, photography, and is a symbol of Japan.

And there it was, right in front me and two mountains away.

Then we rode a train down to Gora, where we got on a cable car. The only other time I've been on a cable car is going through the Bronx Zoo, but this cable car ride was much more expansive and not as scary (I hate heights). Apparently, the first cable car in Hakone was operational in the Taisho Era, in 1921.

The cable car was actually taking us down to Lake Ashi or Ashinoko, which is a crater lake. In Japanese, my last name comes out sounding like "Ashi," so we kept saying that I was visiting my own lake. 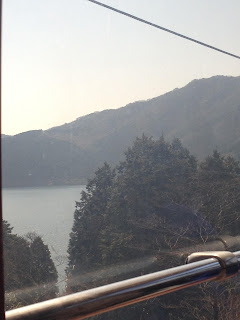 We got on a cruise boat that took us across the lake, where we saw several lakeside hotels, a torii gate to a shrine, and one of the sites that used to be a checkpoint on the road to Tokyo.

The boat docked in Hakone-machi, where we were going to board a bus to get back down to Hakone-Yumoto, but we had some time before the bus, so we ducked into the nearest gift shop to take a look around.

The area is known for its inlaid woodwork. 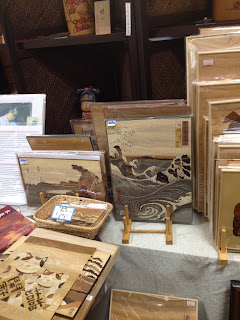 Then back down the mountain we went and back on the train to Kawasaki.

The next post will probably cover the mountains of food I ate while in Japan. So much food.