I'm writing one story and researching/thinking about/percolating another story which actually has something like 30K already written but I've had on hold.

The one I've actually been writing is The New Bride of Banner's Edge. It's ostensibly a Regency romance, so it should be light and fun and frothy, but because this is me and I'm nothing if not a slightly warped soul, the new bride of the title begins the story a widow.

I hope the romance-y bit kicks in at some point.

So last week, I went through a Google search to figure out Georgian and Regency era English funeral and burial customs. I knew embalming began in the U.S. during the Civil War, but were bodies embalmed in 1804? Did they have funeral directors? And what about this idea that women didn't attend funerals?

Granted, this can be skimmed over in the interests of, well, getting to the romance-y bits, but the answers turned out to be: no, embalming wasn't a thing in England, the dead were washed and laid in a shroud in a coffin in a room in their house, and other facts and things I can't quite remember at the moment. Women often didn't attend funerals (because emotions in public=bad), but sometimes they did.

Jane's husband dies in Epsom, but he's buried in Kent, so that means the coffin needs to travel. It'll only take about a day or so of travel though, so I think it'll be okay.

The second thing I've researched recently is women's higher education, specifically in the late nineteenth century in England because I want a character in the Victorian story, Beatrice, to attend university. I'm duly reading a book called Bluestockings: The Remarkable Story of the First Women To Fight For an Education right now.

There were women's colleges by the 1890s and many of the major universities in Britain granted women full degrees--except Oxford and Cambridge, which admitted women as students into women's colleges like St. Hilda's, Lady Margaret Hall, Somerville College (where Vera Brittain went), Girton, Newnham Hall and others. The female students were allowed to attend lectures at the universities, sit their exams, study full courses, but they weren't allowed to take degrees from Oxford or Cambridge.

I'm still a little shaky on what this means exactly, but basically, I think it means that they didn't get diplomas at the end.

In 1897, Cambridge University voted whether to include the female students at the various Cambridge-satellite women's college as full members of the university--to grant them full degrees and allow them to be part of the governing of the university.

In protest, the male students created an effigy of the typical female undergraduate on a bicycle, hung it outside of a building, and held banners saying things like "No Gowns For Girtonites" and "Varsity For Men." 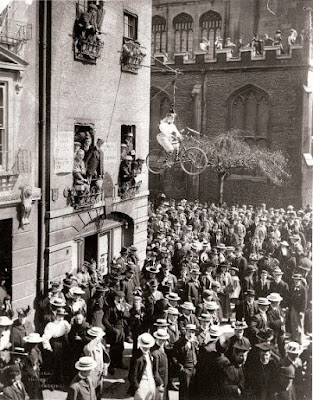 Look at this nonsense!

At any rate, the resolution did not pass and in celebration (no doubt drunken celebration), a crowd of men tore down the effigy, tore it to pieces, decapitated it, and then stuffed it through the locked gates of Newnham College.

Beatrice would be giving an elaborate eyeroll upon hearing this story.

Oh, also: this post will be my last for a while. I'm traveling overseas and won't be back until the end of March. I'll be back in April with news posts galore, I'm sure.