- January 21, 2017
Today, two friends and I arrived in Manhattan around noon, walked downtown about ten blocks, and participated in a historic day: the day of the Women's March and the various sister marches all over the world.


The funniest thing about waiting to get into the plaza: there's a Trump Hotel on that corner! 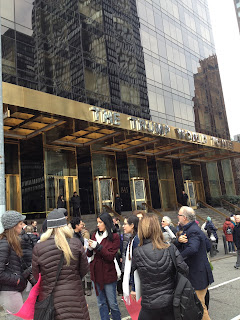 At one point, a young girl stood at her hotel window and jumped up and down waved at the crowd. At another point, we noticed a guy hanging a sign under his apartment window and leaning out way too far to take pictures. 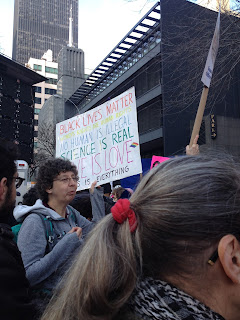 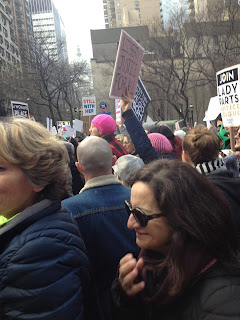 We turned onto 42nd Street and walked crosstown. The crowd thickened and slowed the closer we got to Grand Central Terminal. We saw more signs--so many signs and so creative. We were part of this mass of humanity walking through Manhattan, but the energy was really good. There weren't any crazies or rage or anger in the crowd; it was a peaceful, focused crowd.

We walked by the Chrysler Building. 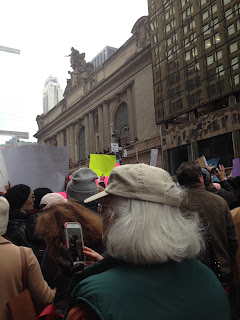 At Grand Central, we looked up and saw people standing outside the terminal and we all did the same chant. It echoed as we walked under the bridge. 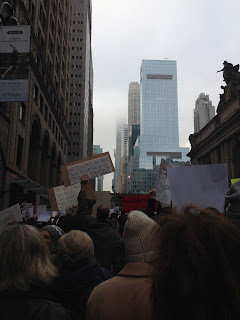 We got to 5th Avenue. Fifth Avenue took a good long while. The crowd was thick and there were police barricades on either side, so we were channeled onto the road. We marched closer and closer to the evil castle--Trump Tower--which looms over Fiftth Avenue. 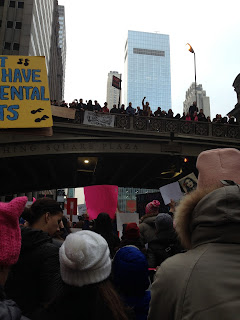 I've done a few protest marches, but they were back in college. I've never been in one in my hometown and definitely not in one this large. The fact that it was worldwide is astounding.

I'm seeing a bunch of pictures from all over the country, from friends who attended various marches, and on Twitter, from people posting pictures of their local gatherings.

The best thing? As far as I know, it all went off peacefully. And there was so much diversity in the crowd: plenty of men, lots of kids, different races, ages, languages, abilities, sexual orientations.