- November 17, 2016
I think we can give up the pretense that I'm still doing NaNoWriMo this year. I have one completed short story ("Haunted Lake") and two beginnings of short stories ("The New Bride of Banner's Edge" and "The N Train"), but that's as far as I got.

I want to complete those stories and the others that I have ideas for, but...not just yet. Work is getting busy, I'm volunteering at the library, and it's November, which means that I'm entering my why-am-i-so-tired time of year.

However, I am back to the Victorian novel--I picked up where I left off and I'm actually really excited to continue writing that. I'll probably be switching between this novel draft and the short stories through the end of the year into early next year.

What got me to turn back to my Victorian novel was watching the new Netflix series The Crown. The Crown is a ten epsiode series (season two is filming now!) about Queen Elizabeth II of England (the current queen). It takes place in the late 1940s into the 1950s and covers Elizabeth's accession to the throne after her father's unexpectedly early death, how she adjusts to the role of queen, how her husband Philip adjusts to being a consort, how Winston Churchill the prime minister guides the queen but also doesn't want to face growing elderly... 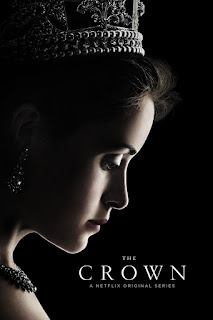 It was a great drama full of amazing sets and costumes and it filled the void that Downton Abbey left, so I was quite happy. Plus, I like how it shows the problematic aspects of an empire--some of the things the royals say about their colonies are not the greatest, but then, those were the attitudes they held in the 1940s and 1950s.

It had a similar pace or examination of characters that the Victorian draft was heading towards as well.

I'm also eight chapters in to Elizabeth Chadwick's second Eleanor of Aquitaine novel, The Winter Crown. As usual, Chadwick's writing is evocative and draws you in. And I picked up three paperbacks at my favorite bookstore, The Strand, last week because bookstores are magical and soul-healing. I bought 1984, Wide Sargasso Sea, and Room.