- February 19, 2016
So, I'm drafting my new story right now, but instead of using the NaNoWriMo put anything down and don't look back method, I'm trying to write quickly but I am taking time to edit things a little. 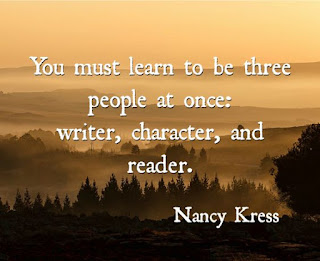 Last night, I was writing some of Chapter Two. I'm wrapping that chapter up. And as I typed, I realized that I was doing something that was a) bad writing and b) giving away the whole story. I recognized it as something I've definitely done in the past in other projects.

Here it is. It was dialogue. Ursula's mother, Mrs. Houghton, is talking to Ursula.

"Ursula, you can make a real difference here. The Maldens have pedigree, this land, this house. They have the culture and of course, the title. But one thing they don't have? They haven't unlimited funds. They can't even keep up this house in good repair!"

I could've left that ranty block of dialogue in and fixed it in the revision, right? But I thought I should fix it immediately when I knew that that wasn't good. I have a tendency to write characters who just blurt things very directly sometimes. I think it's because my inner, mental, constant-writer's-monologue in my head is pretty blunt and pretty direct. But let's be real: dialogue like that is not, in any remote way, realistic--for life or for fiction.

I wrote it, re-read it, and reshaped the scene:

"Well, we ended up going to the very back of the house to see a gallery with very large windows and good views," Ursula said. "And it was quite derelict! The light fixtures were askew. The carpets snagged, the walls in need of plaster and paint. I'm sure there were leaks."
"Hmm."
The maid finished her task and Ursula bade her to go downstairs. Once she left, Mother said, "Well, that's an opportunity."
"What do you mean?"
"Ursula dear, you know what we heard in London—what we've heard in New York even, that many of these scions of great families are a bit short on tin."
"Yes."
"Well, I think you saw evidence of that this afternoon," Mother said. "Are you ready to go down? You know my dear, I think you have a chance to make a real difference in a house like this." Ursula rose from the chair and slowly walked, tugging on her gloves.
She smiled at Mother. "Oh, Mother, what is so wrong with marrying an American lad?"


"Nothing," Mother replied. "Of course not. But Europe has class and culture and it would be lovely to see you be a countess. Or for Simon to marry into a family of great consequence—far greater consequence than the Rockefellers."

There are far better ways to get that same point across and far better to weave it in. It's the basis of Ursula's storyline, actually, that she's an American Dollar Princess buccaneer who marries into a British family of long lineage, big house, and not enough cash.

But we don't need to hit someone over the head with it.

And thus, I think I have grown able to edit a little bit while still drafting and moving forward with the story--and recognizing things like giving away the entire plot line in one weird go.