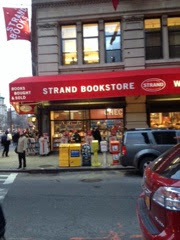 Today, I saw two of my best friends for an outing. We went to see The Imitation Game (really good movie; it made me cry), which stars Benedict Cumberbatch. It is about the breaking of the Nazi enigma code by a group of linguists, cryptographers, mathematicians, etc. at Bletchley Park during World War Two. In particular, it is about Alan Turing, who was brilliant and homosexual and prosecuted for "indecency" and forced to have hormone treatments--chemical castration--by the British government.

We saw the movie in the Village, which placed us mere blocks away from The Strand. The Strand is book heaven. There are cheap books outside, new and used books on every conceivable surface inside, and three floors of books. Book heaven.

I really don't get there enough; I should go more. I kept seeing books on my to-be-read list and picked up others that I may very well have read a little of had the place not been hot and crowded on this holiday Monday. 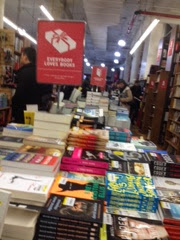 The fact that I only came out of there with two books is...a bit of a miracle. I've been reading so much on my Kindle lately that being in the nirvana of books made me feel overwhelmed and peaceful at the same time. Overwhelmed, because there are so many books and oh, my god, there's that one that I wanted to read, too! My birthday is later this week and really, what better way to treat myself than good friends, food, Cumberbatch, and The Strand?