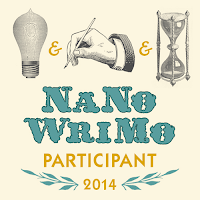 I'm actually writing this on Day 13, so I may or may not come back to tell you how Day 14 actually goes. I expect to hit 25K though.

It is Week Two of NaNo, which is traditionally Hell Week for NaNo. The excitement of beginning the novel has worn off and you keep looking at the stats chart and calendar and go, "Oh, God, how many more days do I have to do this for?"

For me, it's been an interesting week in that I'm totally getting that Week Two vibe of seeing a lot of what's wrong with my story, namely that Nicole, my modern day MC, isn't as well-written as the Victoria chapters are. But maybe because I'm now into parts of the story I haven't spent as much time with as the beginning of the story, I find myself more summarizing a lot of narrative and scenes rather than really taking the care of getting really into them. I'm not too worried, knowing that this is all going to be revised and rewritten and better researched anyway.

But it's still not a great feeling to re-read parts that aren't your best work. Anyway, here's your excerpt of the week. To set the scene, this is Nicole meeting with an attorney about this strange letter she received:

"Ms. Avila," the attorney said. "My name is Brooke Davies. Thank you for coming." We shook hands and Ms. Davies gestured me to a seat. Ms. Davies was in her forties somewhere, though her face was unlined except for a slightly sagging chin. She had short blonde hair and black-rimmed glasses, which made her seem serious.
"So, as we said on the phone," she began. "The reason why Lohan, Fraser, and Cohen has been trying to reach you is for an entirely legitimate reason." She reached into one of the manila folders on her desk. "It's unusual. Basically…do you know anything about the British aristocracy?"
I blinked. "What? Um, no. Like, dukes and earls and stuff?" God, I sounded so ignorant. Get it together, Nicole. You're an educated woman, for God's sake. You're a schoolteacher.
Ms. Davies smiled. "Downton Abbey-esque. Well, the firm represents the interests of the Earl of Malden and has done since the 1940s. The current Earl of Malden is childless. He has no heirs, so the title will die when he does."
Right. I remembered reading novels like that, with dukes and kings and countesses who had to marry in order to have an heir to inherit everything. I hadn't quite thought that they still did that or that that was still a major concern at all in the United Kingdom. But then again, they do still have a royal family.
"In the past, an Earl's estate, house, jewels, titles and money would all pass to the next heir in a huge bundle called an entail. Entails existed so that those major things couldn't be sold away. They've been done away with now and as Lord Malden doesn't have any heirs, by a binding family contract, any money he leaves, art, cars, etc. go to the family's living heirs."
Ms. Davies paused and said, "You are one of those heirs."
I cleared my throat. "How exactly am I related to this Lord Malden?"
"Fourth cousins."
Fourth cousin? Who the hell has actually has fourth cousins? By that time, aren't you barely related?
"Two times removed," Ms. Davies added. "It's a distant relation."
"I'll say."
"The reason it's coming up now is that Lord Malden is in poor health. He's in his seventies. There was a clause written into the fourth Earl's will and continued on through subsequent earls' wills that, should there be no male heir to carry on the title and inherit, then the family will let the title go gracefully, but give up any remaining assets to descendants rather than the Crown. Of course, a male descended from a male gains the title and will be the next Earl of Malden. A male descended from a female wouldn't get anything."
"And are there men to inherit the title?" I asked, feeling as if I'd stepped into a Jane Austen novel.
"No. The lawyers have combed the family tree, but no. Lord Malden is the last." She pushed some paper at me. "Here's a simplified family tree. Your common ancestor is the fourth Earl of Malden. You descend from the fifth Earl's elder son, through his daughter." Ms. Davies' perfectly manicured nails traced the boxes down. Fourth Earl to the fifth Earl, fifth Earl to a man called Robert Matthew Conrad Ponsonby-Courtney, then to that man's daughter, Victoria Elizabeth Matilda Ponsonby-Courtney.
I almost let out a whistle. Here I was, just plain Nicole Miranda Avila. Ponsonby-Courtney. Sounds like a stick up someone's butt. From Victoria came a son, then a daughter, then two more daughters—my grandmother and my mother. Then me.
"Are there—are there other descendants through women in this family?"
Ms. Davies nodded. "Two others. One is a young woman descended from your ancestor Victoria's cousin Conrad Ponsonby-Courtney, the sixth Earl. Another is a man descended from the fifth Earl's sister."
"Right. Okay. So…what does this mean?"
"Through the clauses of the Ponsonby-Courtney wills, you would split the assets—money, mostly—with the other two. You'd also inherit certain pieces of art or jewelry and share in some business interests—stocks, bonds, that sort of thing. The house has already been given to the National Trust and much of the Ponsonby family's land has been sold away, so there's nothing there."
I blinked. It was a lot to absorb. Because of a lot of twists and turns in the family tree, I might inherit some money from a fourth cousin twice removed, who happened to be British and an Earl, all because he didn't have any children to inherit his title and money.
"How much?" I asked. I had to clear my throat again. I felt choked. "How much would my share be?"
"Fifteen million pounds," Ms. Davies replied. "Which converts to about twenty-four million U.S. dollars, at present conversion rates."
I tried, in vain, to keep my jaw from going slack and opening. Twenty-four million dollars? It may not seem like much to a high-powered lawyer like Ms. Davies or to Freddie, who traded in astronomical amounts down on Wall Street. But for a girl from Queens, still one of the more affordable places in New York City, who only made a little more than forty thousand a year, twenty-four million seemed insane. Good God, why give that money to a bunch of very distant cousins? You might not be able to take it with you after death, but there must've been a charity or foundation or something the money could go to?
And what was this about a clause going down the line of Earls? Seemed a bit weird. I wonder who started that. I can't imagine an Earl even having the thought that his male heirs wouldn't continue in perpetuity.