Automobile
Benz had the first patent for an automobile design by 1879. Horseless carriage, much?
In 1896, Benz patented the first internal-combustion engine. The diesel engine was invented in 1897. Still, cars were rare in the early twentieth century. Only the very rich could afford them until Ford started mass-producing the Model T.

Motion Pictures
In 1888, Louis Le Prince was granted a patent on a motion film camera/projector.  He also tried to patent a single-lens camera, but was denied, although Edison later patented such a camera. (Patent wars, y'all). The Lumiere brothers patented a cinematograph, also a camera/projector device, in 1895. Unlike Edison's kinetoscope, which only allowed one viewer, the cinematograph allowed many viewers.

Nitrous oxide (laughing gas) was a hip thing to do for young rich men even as far back as 1799, but in 1846, an American dentist began using ether as an anesthetic on his patients. The picture down below is of the Ether Monument in a corner of the Boston Public Garden. The monument was right near my first two college dorms. 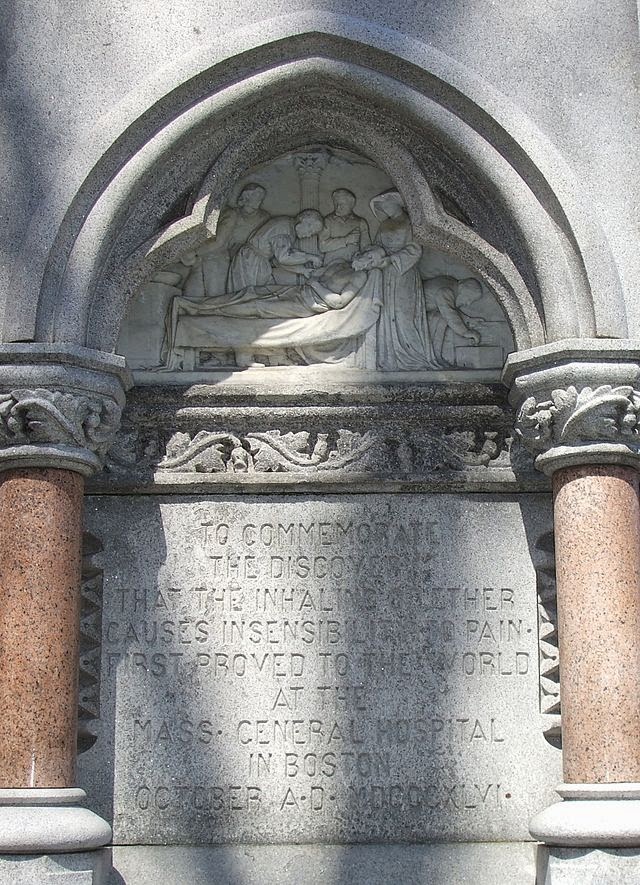 Chloroform was introduced as an anesthetic in 1847 and considered safer than ether because it was less flammable. Queen Victoria used chloroform during the birth of her eighth child in 1853, thus making the use of drugs during labor an okay thing to do.

Aircraft
Hot air balloons had been traveling the skies of England since the early 19th century. Hot air balloons were used as observation points and places to take aerial pictures during the American Civil War. Then monoplanes, gliders, and dirigibles came into being.

Then came the Wright brothers, who, of course, first flew awesome gliders and then finally flew an airplane off the ground in 1903. At around this time, the Zeppelin was being tested in flight.

Radium was discovered by Marie Curie and her husband Pierre on December 21, 1898. They had discovered polonium not long before. Marie Curie died in 1934 after decades of exposure to radioactivity. Apparently, her papers from the 1890s are so radioactive that they are kept in lead-lined boxes and anyone who wants to read them must wear protective clothing.

X-Rays were accidentally discovered by Wilhelm Rontgen on November 8, 1895. One assumes that X-Ray glasses followed not long after.

There will be more Cool Things About the Victorian Era to follow.
history-Victorian