- January 22, 2014
This week, in addition to joining Goodreads and getting four episodes into Orphan Black (Tatiana Maslany is amazing, playing all those clones) and...oh yeah, turning 23 for the sixth time...I thought I'd give you guys a little peek into the outlining process I'm using for the draft four.

I don't need characters sheets. I don't want to draw charts and large circles and stuff. The outline I did for the 2013 NaNo project was pretty simple, I guess--I kind of just summarized scenes and the plot in normal paragraph format. It was the first time I felt compelled and able to do that with a writing project. Normally, I say that my first drafts are my outlines. The fact that I was able to get so detailed--writing down dialogue, for instance--but it still felt fresh to me as I wrote the scenes during November was pretty incredible. Plus, I mostly stuck to the outline, too.

I felt an urge to write in a notebook, in pen. I don't know why, but I figured I'd go with it, so...
I bought a little notebook: 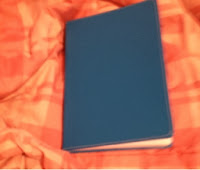 A friend wanted to know why I was going to handwrite the outline. "You won't be able to read it later, with your handwriting."
When you make it to a fourth draft, you really want to get it right. Plus, the novel is far more complicated than my NaNo project was. I wanted to be more deliberate in the way I moved my characters through the plot. I wanted to be more deliberate in having a plot. So instead of just starting a new document and adding a bit here, subtracting some there, I really wanted to have a strong blueprint. I looked around for a decent outline process. None of them made sense to me in the way I spin out my ideas.

This is page one of the notebook. 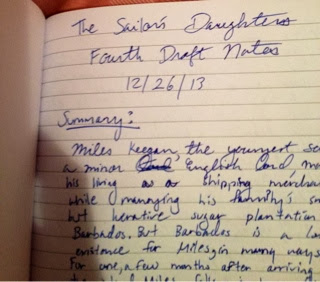 Basically, I began with a summary of where my protagonist is the beginning of the novel and keep going. When I finish the outline and begin to write it out in narrative, every detail I put in will only help me. It's a highly summarized yet detailed version of scenes, characters, dialogue, setting, etc.

I have six third-person POVs in this novel; I might eliminate the sixth and make it five POVs. I thought about color-coding for each narrator, but I haven't done that. I've been skipping lines in between long paragraphs of descriptions of what I want to happen or what I want the character to be thinking or feeling when I need to move on to something else.

When I need to add something, I write it on a Post-It and stick it in: 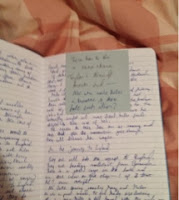 I'm not outlining by chapter either. I'm simply going in parts, which is not how the novel will be organized. It's more for me to keep track of what part of the story I'm in and what location the characters are in. I'm getting to the part of the story where I have to seriously eliminate scenes and threads that were in draft three and replace them with the stronger ideas I have going in from this outline, so there will be reading of draft three, reading of betas' comments, and then, finally, something written down in the notebook.

There's something different about flipping through handwritten pages than scrolling through computer documents looking for things for me.

What kinds of methods do you use to outline?
Crazy Writer Stuff Revising The Keegan Inheritance writing tips