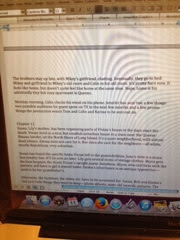 I classify myself as a sort-of pantser. What I mean is that I go in to a first draft with main characters, backstory, and a basic idea of the plot and maybe some research (if applicable). And then I go off into the chaos and fury of a first draft.

For whatever reason, I already know what I want endgame to be in this upcoming NaNo project. So, to stave off any urges to cheat and dive in to my first draft, I'm writing my outline. I started in my usual way. Setting: New York City, roughly this year, but could be next year. Characters: Emma, Ailey, Colin, Lily and some minor characters. Backstory: Emma's family is political, she is not particularly politically-inclined. In fact, she's agoraphobic. Colin's an actor, the son of jobbing actors, and becoming a bit more well-known.

Not entirely true: I did a chapter-by-chapter thing for the very first incarnation of the Keegan Inheritance, back when I thought of it as a romance novel. But the descriptions were vague. For example:

Chapter 10: It is time for Madeline to call on Laura. Henry tells Madeline that the house belongs to a French spy. Madeline and Laura have an awkward visit. Louis comes home to find Laura saying good-bye to Madeline.


Chapter 11 in the NaNo project looks like:
Susan, Lily's mom, has been busy organizing Vivian's house after the death. Vivian lived in a nice, suburban, smallish house near the Nassau/Queens border on the North Shore of the Long Island...The furniture and other stuff will have to be accounted for...Susan, Bob, and Emma's dad decide what they want to keep. The kids get to work organizing the basement and the attic. Emma, Bryce, and Robin are in the basement. All they find are boxes of grandpa's things, old Christmas decorations, broken stuff, old computer equipment. Bryce carries the boxes up.

It's actually more detailed that that, but who knows what'll change before November? I'm going for 80,000 words this year. I've already won NaNo twice with 50,000. Let's up the ante a little. I hope that organizing my story beforehand will help me fix necessary things before I dive in to the madness of November.

Do you do chapter-by-chapter outlines? How detailed are they?
NanoWrimo writing tips