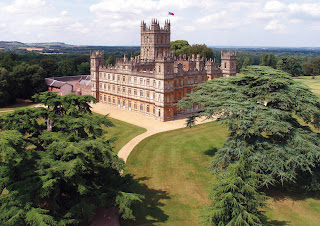 Downton Abbey season 4 has started filming. Here are some predictions for season 4. Agree or disagree? Do you have your own storylines in mind? Sound off in the comments below. Contains spoilers for season 3.

Robert: Now that his adult heir is dead, I think that Robert will be extra cautious about his new grandson, who is now the heir to the title and estate. Perhaps now seeing Matthew's modernization of Downton Abbey as a good thing, Robert will encourage and become more involved in modernizing the place.

Cora: With two grandchildren living under her roof and a widowed daughter, I think Cora will be the quiet support she usually is. Of course, now that Lady Rose is going to be living at Downton, Cora will have a chance to raise another daughter, of sorts.

Violet: Um, awesome as usual. That is all.

Mary: Now a widow and a mother, I think we may see Mary be especially vulnerable this season. Or very cold, since she tends to bury her true feelings. Mary could take an interest in the running of the estate, since it's her son's  legacy now. And rumor has it, there may be a new love interest in the works.

Edith: Season 3 showed Edith coming into her own. The question is, how willing is she to flout convention and take up with Michael Gregson?

Tom Branson: Tom is the estate agent, but now without Matthew's vision. If the season takes place in 1922, will Tom get a chance to possibly return to Ireland? 1922 is the year that the Irish Civil War begins. Surely his passion for politics will be roused. Will we meet more of his family? Will he use his position as a land agent to launch himself into local politics? I personally think it's a little too soon to see him with a love interest, but it might be a possibility...

Lady Rose: Rose is coming to live at Downton. We don't know her character that well, but I can guess that she will continue to be rebellious and, I hope, mature as well.

Isobel: My prediction is that Isobel will throw herself into being a grandmother and with her son dead, into another cause. And I wonder if she'll more carefully consider that marriage proposal from Dr. Clarkson?

The Servants
Carson: Ever the traditionalist, Carson will balk at whatever new technology enters the house next.

Mrs. Hughes: Mrs. Hughes will continue to run the house with her sense of kindness and humor intact.

Mrs. Patmore: I hope she's recovered from that supplier who was flirting with her in the Christmas Special. I expect more funny phrases from her and I wouldn't mind finding out more about her background.

Anna & Bates: Could a baby Bates be on the way?

O'Brien: Did anybody else think that O'Brien getting along so well with Lady Flintshire might mean she's headed for India with that lady and away from Downton? And since Bates and Anna have now heard about "Her Ladyship's soap," do you think they might try to find out what that's all about?

Thomas: Still holding a torch for Jimmy, probably. I want Thomas to have a real boyfriend though!

Jimmy: We don't know a lot about Jimmy--even if he's actually as straight as he seems to be.

Daisy: Either tell Alfred you like him or take up that opportunity Mr. Mason's offering you! I'd love to see Daisy as a farmer.

Ivy: Um...if we get a new footman, do you think Ivy will flirt with him, too?

Also, with two babies in the house, I imagine a nanny or nurserymaid will step up among the servants as well. And probably another housemaid, now that Anna is a ladies' maid.