- January 28, 2013
The cast of Downton Abbey won the Screen Actors Guild Award for Best Ensemble in a Drama. The whole cast gets the award, which is pretty amazing when one considers that the competition were the casts of Mad Men, Homeland, Breaking Bad, and Boardwalk Empire. 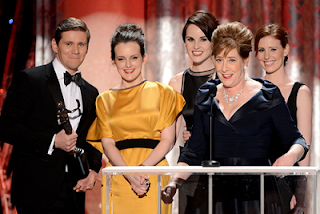 
On the red carpet (spoiler-free):