My E-Reader and I 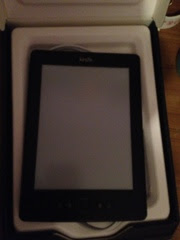 I received a Kindle for Christmas and in the short period of time since I opened the package and now, I've probably read more books than I did for the latter half of 2012.

Granted, most of my lack of reading last year had to do with finishing my book--and a lot of what I've been reading is for research or to blow off steam, like reading fanfiction.

In order to write, though, you have to read. I found myself toward the later stages of my revision trying to remember how to write proper descriptions and actual paragraphs.

So far, I have read:
The Hunger Games trilogy
To Marry A Prince by Sophie Page

I have started:
Wolf Hall by Hilary Mantel (I may end up becoming intensely jealous over the prose of this book, but I intend to study it and figure out to make the "camera" of my scenes as present as it is in the first scene of Wolf Hall)

I have downloaded:
To Marry An English Lord, the book that inspired the character of Cora, Countess of Grantham on Downton Abbey
A Place Beyond Courage by Elizabeth Chadwick

I asked for a Kindle for Christmas not because I want to read during a commute (my commute to work involves too many transfers) or because I never ever want to buy a book again, but because there are a lot of books out there that I want to read, but I don't necessarily want to own or be responsible for. I don't want a book I only want to read once or twice taking up space in the already limited space of my room.

At the same time, the next time I'm near Barnes and Noble, I want to buy Tempting the Bride by Sherry Thomas and maybe The Chronicles of Downton Abbey.

And it's about time I became familiar with e-readers. I've been hearing about how they're going to kill publishing since at least 2004, after all.

Do you have an e-reader? What kind of books do you read on it? If you don't have one, why?