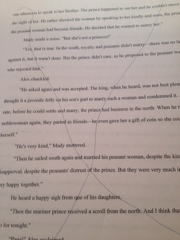 I hate math, I'm not good at it, never have been. Therefore, I don't like mathematical metaphors, but revising (and its substep, editing) are essentially a lot of adding and subtracting.

So, I finished "editing" my book. Of course, this edit is only a preparation for draft three, so I'm still running well into the "it takes three to five years to write a good historical novel" thing.

Clearly, the next project is going to be contemporary.

After I finished the second draft, I decided to outline that version. It was an experiment, one that I read about on Pub Rants. It eased me into thinking of the book less as a creative venture and in a more technical way. Writing fiction is both creative and technical. I've got the creativity and the spawning of ideas down, but the technical aspects of plotting and how much showing and how much telling I should do, are more elusive.

I think the editing process properly began when I printed out 200 pages of the 313 page book and scribbled all over them. That was fun!

Then I went back to the computer and duplicated my document and turned on Track Changes. Any corrections I made on the paper were entered and accepted. Any comments I made on paper were entered in as well--most of them are reminders to double check research--and if I re-wrote dialogue or entire conversations or bits and pieces of narrative, I put that into the document as well. I read through the last 100 pages on my computer and added,
subtracted, rolled my eyes and got to the end. 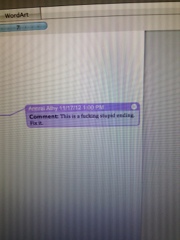 In case you can't read what it says in that picture to the left, it's the last Track Changes note I made in the document. It says: "This is a fucking stupid ending. Fix it."

I didn't really add much. I'm going through new research sources for a planned first two chapters that will lead into the first "door of no return" plot point. I have parts I want to cut down or new scenes that I want to add in that I haven't done. I have a plot line I'm thinking of, but I'm not sure how it would work yet.

It was mostly subtracting. 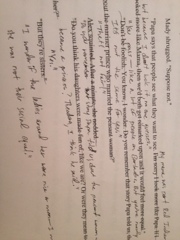 From here, I'm going to hopefully get a second pair of eyes to read it. There comes a point in a novel's life when it has to be read by someone else besides the writer.

The third draft might not be as bad, though. More adding and smoothing and less hacking and chopping, I hope.

So, my book stats going into the third draft are:

The most troublesome plotline: Cut in its entirety.