Showing posts from May, 2012
Show all

I wonder if you guys have seen this video on YouTube:

- May 24, 2012
I joined the AbsoluteWrite forums the other day and realized, while I was writing a post, that I have written five novels.

Really? When did that happen?

Which is hilarious, when you think about it, because I've written all of those while having this blog, which means that they're documented--and even so, I didn't quite realize how many books I'd written.

And the WIP is really a better version of the same characters as Book 2...

- May 22, 2012
I have had this blog for three years. I have had it open to anyone who happens to know how to work Google for...about a year? Year and a half? It's mostly a self-indulgent venture, sort of an electronic, multimedia, social version of my teenage journals, except it's happier, less whingey-moony-annoying and mostly about my writing.

Of course, my writing and especially my revision processes are still evolving and will continue to do so. But here is what I've learned about my writing process in the last three years:

"I'm Going To My Mind Palace."

Have I ever mentioned how much I love BBC's Sherlock (shown in America on PBS)?
I adore it: the intricate cases, the acting, the long-winded deductions, Sherlock, Watson, the snarkiness, the floating text, the writing.


Sherlock going to his "mind palace," a phrase that I am now stealing. 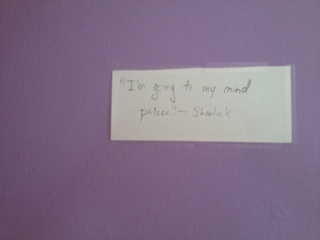 Reading another writer's words--whether in their work, their letters or memoirs, or just a simple, pithy quote--can be enormously inspirational.
My very lavender walls used to have posters on it. Movie poster there, photos there, magazine picture of an actor I had a crush on there, collage my friends and I made of a band we liked over there...
Things have come up and come down on my walls. Either I got sick of looking at it. Or I outgrew it. Or the tape didn't hold up against the walls.
So recently, I've been cutting up bits paper I have, writing something on it, and taped it firmly.
Post a Comment
Read more

What Makes a Good Villain?

Sunflower here, on a fairly productive writing day, musing about villains. Or, as they're called in literature, antagonists.

Antagonists are defined as "a character, enemy or institution which represents the opposition against which the protagonist must contend." Sometimes, the antagonist is the foil to the protagonist and they are directly locked in competition with each other. Other times, the antagonist is more representative of an idea that opposes the main characters.


For my money, the most frightening literary villains I have read come from fantasy: Sauron in TheLord of the Rings and Voldemort in Harry Potter. They have a lot in common, those two. Not only are they representations of evil, but they're also disembodied, menacing, dangerous, and their plotting, their minions and their ideas of world domination and racial purity are scarier than any thriller's criminal or terrorist could be, to me at least. They both echo Hitler, after all. 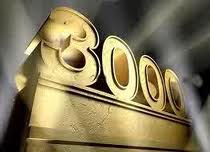 I just noticed a second ago that this blog has 3,000 pageviews.

Are you for serious?

I am in the middle of this crazy hard scene right now. It was a complete throwaway scene that was written in October  of last year and it didn't move the plot along or anything. It was just there as a transition. I could have cut it out, but since a lot of the minor characters are in this scene, I think it might a good place to set up some foreshadowing.

I kind of see this scene as the end of the beginning. That might be because I'm half a scene away from how I started writing the middle portion of this mess during NaNoWriMo.

That One Big Fat Historical Moment 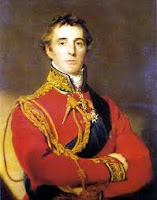 I mean, think about this for a second:
An Infamous Army is about the lead up to and the battle of WaterlooThe Widow of the South is about the Battle of Franklin during the Civil War and the aftermath of it, especially the Confederate cemetery on the grounds of the Carnton PlantationThe Queen's Dollmaker is about Versailles and, eventually, the French Revolution
Post a Comment
Read more
More posts