The Would-Be Assassination(s) of King George 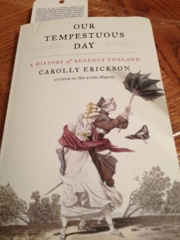 I've cracked open another book. This time, it's history, and it's about Regency England.
I'm only a few pages in, but I've already read about an American visitor to England in the period, who kept journals of his visit, and of course, about the madness of King George.
And I learned something quite interesting. On May 15, 1800, at the Drury Lane Theatre in London, George III was standing in the royal box. The national anthem was playing. Then, from the audience, a shot rang out, aimed at the king. It missed and the man who fired, James Hatfield, was tried for treason and acquitted by reason of insanity. The trial brought about the passing of the Criminal Lunatics Act of 1800.
I only bring this incident up because my story (which I read all the way through today for the first time in months) begins in spring 1800. I think it would be an interesting story to include, perhaps with my fictional lord telling my fictional Miles all about it.
The book is about the Regency and 1800 is a decade before the Regency begins. But I look forward to mining more information about England of the time and perhaps, finding out more fascinating incidents like the would-be assassination of King George III.
Also, check out this commemorative medal. It says God Save the King-Preserved from Assassination--May 15 1800.
This was not, however, the only time George III was nearly killed. He was stabbed in 1786. Of course, he famously went mental and spent his last years blind and insane at Windsor, where he died in 1820.
Books: Non-Fiction history-Regency Research