I wasn't going to write anything about September 11, 2001 on this blog. But it being the tenth anniversary and being a New Yorker, it's not a date that is easily ignored. It's a watershed date for my childhood, one of those dates where there was a clear difference between the before and the after. If one was writing a novel, it would be the moment that the story turns.

Ten years ago, I was 15 years old. I was in the car with my mother, who was driving me to school early because I had to change my schedule. We were listening to Z100, as we did most mornings, when one of the DJs suddenly said, "Hey, I think I saw a plane go into the World Trade Center."

Mom and I thought it was a joke. I got to school, couldn't get my schedule changed that day, and since there were a few periods between my actual school day beginning, Mom took me home for a little bit. I turned on the TV. Only CBS came in and they were already on news coverage about the plane that had flown into the Tower One.

Then my school day began and it was surreal. I don't remember learning much that day, only the confusion and suppressed panic that permeated the air as each shift of kids came in, bringing more news. The other tower had been hit, too. There was a hijacked plane heading toward the Pentagon or the White House or the Capitol.

It was in ninth period World History that our teacher set the record straight for us. By that time, the towers had fallen down. All flights had been grounded. "So why am I hearing planes?" One boy asked.

"Those are fighter jets." They were even flying over Queens, over our high school. I felt profoundly unsafe, in a way I never did before or since, because even then, our government didn't know what would happen next. The subway into and out of Manhattan was canceled. My father's office building was evacuated. My cousin had to walk home to Queens. In Chicago, another cousin was turning 9.

When I got home, I finally saw the footage of the towers coming down. I couldn't believe it; it seemed like a special effect in a disaster movie. Because the TV transmitters had gone down with the towers, my house only had one channel for the next few months. And they always talked about 9/11. Always. That footage of the plane flying into the tower and bursting into flames is one that I can never forget.

I avoid 9/11 coverage on TV around anniversary time. I don't need that to remember and I don't really like to dwell on it. Only months later, our country went to war--a war we're still fighting--and my view of my country changed forever.

The scale of what happened is still incomprehensible to me. I watched a few minutes of the reading of the names and the moments of silence this morning. I thought about what I was doing on the day and how much had changed, how much had remained the same.

I took this grainy shot of a table at work, in the mall today. It's a table with LED candles and American flags, surrounded by photos of the carnage of that day. 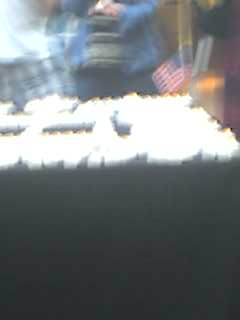 I heard a little girl ask her mother as they passed by, "What's that for?"

Her mother said, "For the people who died. Ten years ago."