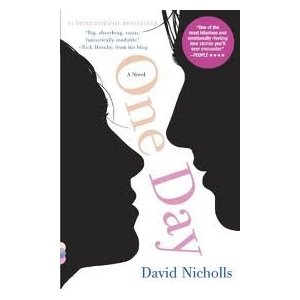 So in addition to an earthquake shaking us up in New York for thirty seconds, I finished this novel the other day and I want to tell you guys about it, because, as usual, it has spawned an idea. And it's really, really good and you should run out and get it right now.

The book is called One Day by David Nicholls. It is about Dexter and Emma, who meet at their college graduation on July 15, 1988. The book then follows Dex and Em through their lives--their friendship, careers, mistakes, drunken nights, relationships--every July 15th for the next twenty years. So basically, chapter one is July 15, 1988 and chapter two is July 15, 1989.

What I loved about this premise is that there is a great deal of reality, despite the clear fictional structure. Some years, it seems, Dex and Em have been talking and hanging out a lot and so, when July 15th rolls around, they are hanging out together. Other years, they've lost touch with each other or are plain busy, so they are living their separate lives.

I underlined a few lines that I loved (in pencil. I only do this in paperbacks and only in books I really adore.)

Sometimes, when it's going badly, she wonders if what she believes to be a love of the written word is really just a fetish for stationery.

I think what I loved about this and really connected with, was the truth of the characters and their adult lives. Emma is a bookworm and an aspiring writer who spends some time working in a truly horrid Mexican restaurant, where it is mentioned that the music there is on a loop. Utterly reminds me of my job, that did. Beyond that though, I felt chills at the simplicity of the writing and it made me think about why I was trying to be so over elaborate in my own stuff at the moment.

I'd been warned that the ending was "something else." Yeah, it really was. It kind of sucker-punched me. I wouldn't say it was as shocking as the ending of Atonement for me but it certainly came close.
Books: Fiction