- July 30, 2011
I am unabashedly thrilled because a show I like, Downton Abbey, had their press day yesterday and all kinds of goodies are coming out about the upcoming second season.

The writing on this show is so incredible and I've been reading fanfiction and re-watching episodes and reading speculation on what might happen to whom next season....

Season 1 opened in 1912, with the sinking of the Titanic affecting an English earl and his family--and their small army of servants. It ended, many romantic entanglements, plots, disagreements, and intriguing characters, 7 episodes later, just as Britain entered WWI in 1914. 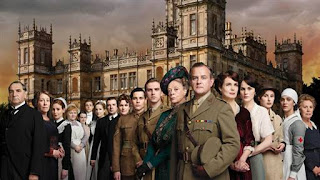 ITV, the network Downton is shown on in the UK, also released a press pack, with little paragraph-long, minorly spoilery bios for every character. So, squee!!
Edited to add: http://www.youtube.com/watch?v=pk9kygpJcOM
Downton Abbey TV