One day, I'll post pictures of my writing corner--including the rather precarious pile of books located on a convenient shelf--but for now, 'tis about my research.

If you're at all interested (and don't mind being spoiled--it's going to a while before this one's finished), you can head over to my wiki and check out the random collection of pictures, links, sources and bios pertaining to the great project known as Iggy (really, I need a title).

My research has not merely been online, of course. It's a bit multimedia, which I love. There are YouTube videos about Henry VIII's diet, his court, his politics, etc. There's a documentary on the Battle of Flodden Field on there. And, of course, clips from The Tudors: more inspiration than research, but still...

Then there are the three cheap books I bought on Amazon.

First came Henry VIII, a biography of the king. 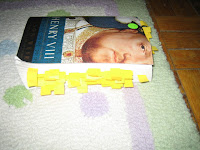 As you can see, I found a lot I could use in there: things on clothing of the era, when certain plagues came and went, any mention of Yorkshire, etc. It may look insane (and I acknowledge that it is), but it was a super resource on general life and attitudes and the court surrounding the king--of which Iggy is a very, very minor part. Henry VIII is not, I reiterate, a character in my story. But he is the King and so, his decisions affect his people, which are my characters.

And then I received the other two books. Something looked awfully familiar. 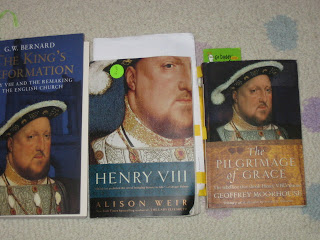 Is that the only picture of him they could get the rights to?

Of course, in the end, most of this research will not be used in the book. I have read that sentiment come from many a blog from many an author. The smaller details of life are in there rather subtly, I think. You know how books often mention objects or big sweeping movements or even things like baking and cooking in lively passages? And it's only after that you realized you learned something?

That's because the author bothered to do her homework. I'm going to try not to get too confused with mine.
Iggy Research wiki