Showing posts from August, 2010
Show all

- August 27, 2010
Pillars Blog Picture
Yes, I've been watching Pillars of the Earth--the series finale is on tonight and I'll have to pant in anticipation on Netflix over my (so far) work-free weekend because we don't have Starz.
As I've been reading Elizabeth Chadwick lately, an author who writes in the medieval period from Conquest down to The Anarchy (which is when Pillars takes place) to Angevin kings to Bad King John and his sinking treasure, Pillars fits in with that time period.
Plus, it fills a little bit of the void left for me by the departing Tudors. British boys! Yes, one of them plays a total psycho, which is unfortunate, as he's actually quite good-looking. But even my lust has boundaries. (Which basically means that near-mute, shy, sensitive artist types get me every time...)
I digress. Upon clicking around on the Interwebs, just reading about the actors, the characters and the time period, I came across author Ken Follet's website. Along with an incredibly confusin…
Post a Comment
Read more

- August 21, 2010
Most of the historical romances I read take place in England, during the Regency Era, among the upper classes. Thus, many of them have titles. In Romancelandia, there seem to be a dearth of dukes running around England, all of them young, hot, single,rich, with names like Raven-this and Hawk-that, etc.
So, to be a little bit more realistic--and because at heart, while I might like reading about the upper classes, I can't say I'm particularly fond of the idea that the upper 1% holds more than half the wealth in a nation (oh, wait, that's our country)--my "romance novels" have a minimum of titles in them.
I mean, come on, Jane Austen wrote about the gentry, who were plenty landed and usually, well-off. And there were more gentry than aristocracy, so....that's where I went, for the most part. Gentry and rich merchants.
I had two titles, both Viscounts (lower on the aristocracy ranking order...under earl, before baron). The girls don't marry either of these Vi…
Post a Comment
Read more

- August 17, 2010
Summer 2008:
Lily Carlson walked into the familiar rehearsal room, glancing into the mirrors long enough to see that her reddish brown hair was still in place and that the cover-up she’d applied early that morning still covered the emerging blue half-circles under her brown eyes. Then she turned away large mirrors that tended to mock American Idol finalists—especially since none of them could dance. “Dance” belonged in heavy air quotes. She’d hardly left American Idol before it was time to come back, to perfect more music, to learn to at least look as if she was in step with everyone else. Had it really been only four days? It felt longer, a lifetime of answering questions such as, “How does it feel to be third place? Was the experience worth it? Who do you think will win?” Her reaction to being voted off had been played over and over again. Lily had even endured having to watch through her original audition in Philadelphia a few times, when she’d sung Janis Joplin. Then th…
Post a Comment
Read more

- August 17, 2010
11/12/04, date this document was saved, apparently: The crew was swarming around the set, which was a small kitchen-like setting, with a table and chair and fireplace. Shari looked around and found Jessica doing her duties. She saw a few of the other actors hanging around; she was disappointed to see that Lij wasn’t one of them. Eventually, Shari settled herself near the monitor. The lights had been set up around the table and leading to the closed door, which she could see. One of the cameramen was going to shoot it on a handheld camera. Shari anticipated more repetitive takes. Her jaw dropped when Amanda appeared, directing the cameramen and doing some last minute rehearsals with Orli. Amanda had on a relatively simple dress—simple for that time period. She wasn’t wearing a hood this time, but she did have a corset and a shift on underneath the voluminous dress. Orli was dressed in simpler clothes. Shari decided that she preferred the men’s costumes. They were practical.…
Post a Comment
Read more

An Experiment, Part One

- August 17, 2010
I was just reading a post on a favorite blog about an author's voice...and how it may, or may not, change as the author matures and becomes more fine-tuned.

So here's an experiment. Me, posting a bunch of excerpts from various times in my life. Let's see how things have changed. All spelling and punctuation non-corrected. In rough chronological order:
4th grade:
On Monday I played and played in the snow. I made a huge snowpile. I made tunnels in it. I called them secret passageways. It was so cool. I loved it. On Tuesday I played with it again. But this time I brought out my plastic doll stuff. I made them the furniture. I threw snowballs. I wished I had more days off from school. * * * 6th grade: April 15, 1996 Everyone was coming. All of Kit's relatives, her children, grand children, and three great-grandchildren. The family always gathered for New Year's and Christmas and Thanksgiving and some Easter Sundays too. But they also gathered on April 15. Then Kit could tel…
Post a Comment
Read more

- August 12, 2010
I finished the outline of the third book in my romance novel series last night. These being the same stories I was fiddling with last summer (seriously--the whole series is planned). I wrote the first one through, submitted it to a contest, got some pointers and honest-to-goodness feedback on the first 35 pages.

Then I got into Last Request and left the Regency historical novels on my desktop.
Well, the spark came back about a month or two ago. I acquired a new Regency-set romance (one by an author I'd never read before, in fact, though I read the blog she shares with other historical romance writers). I indulged my interest in Waterloo by reading Georgette Heyer's An Infamous Army. Then I bought Sherry Thomas' latest release--His At Night--which is actually late Victorian, but her writing is so good, her prose is so beautiful, that it made me want to write a historical romance again. I'm girly-geeky. I like a good historical romance novel. 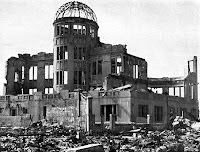 Today is the 65th anniversary of the dropping of the atomic bomb on Hiroshima. I was at my grandma's house today (well, yesterday) and the memorial ceremony was on TV (since in Japan, it was already the 6th). It was held in Hiroshima's peace park--right where the above building, which was damaged in the bombing, still stands as an eternal reminder of what happened.

140,000 people died in Hiroshima, as well as thousands afterward from the effects of radiation--cancer, wounds, injuries. This is the first year that an American ambassador is going to the memorial ceremony. I mean, really. It only took y'all 65 years to attend the memorial service--why even bother at this point? On the one hand, as an American-born young woman of Japanese descent, I am glad that my birth country is acknowledging what it did, since it's never apologized. On the other hand, it feels too little, too late. And yes, I've heard (and was, in fact, taught in school) that the Americans felt the…
Post a Comment
Read more
More posts