Showing posts from September, 2009
Show all

The Emily is run by the West Houston chapter of the Romance Writers of America. They only want up to the first 35 pages of the manuscript, with no synopsis required.

I entered The Keegan Inheritance under the Historical category, with a sub category of Regency. So we'll what happens. In the meantime, I have a modern fantasy story to outline and the Keegan Inh…
Post a Comment
Read more

- September 18, 2009
I'm handwriting the delicate beginnings of a new idea down in a notebook. It came out in present tense. I tried to correct it to past tense, but it didn't seem right somehow, so I'm letting it go as I'm writing and scouring the Internet for a decent epigraph on reincarnation or at least, souls jumping from one body to another.

Relax. That's the only sci-fi-like bit of the story. I promise.

I recently finished reading The White Queen by Philippa Gregory (she wrote The Other Boleyn Girl--good book, terrible movie--and a slew of other Tudor-era related novels. I've read most of them, except for The Other Queen, which is about Mary Queen of Scots. I am fascinated by this period in history--and by Charles Brandon's pecs on The Tudors on Showtime--but if you walk down the fiction section at a B&N, you'll see four million novels based around this period.

Tudors fatigue, my friends. At least until the next season of The Tudors premieres, when another wif…
Post a Comment
Read more 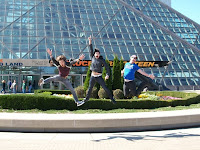 I stole that from Andy Skib's twitter. Someone on a message board commented that while Kyle and Andy (left and center) look like leaping rock stars, David (right) kind of looks like a cheerleader. :D

I was at my aunt and uncle's house on Long Island a few days ago for my cousin John's birthday dinner, when I was asked, "What are you doing?" I said, "Babysitting. Oh, yeah, and I wrote a book."

I was then asked, naturally enough, "What kind of book?"

"Fiction." I haven't found a sound elevator pitch to describe this story (I mean, hellooo....have you seen the awful, dragging synopsis?), so I thought I'd leave it at that. I'm not one to spill the guts of my stories to people at random. There's a time and a place for that...it's called this blog.

"What's it about? It's about us, isn't it?" My cousin Elizabeth demanded. I'm not sure why Liz thinks every story I write is somehow derived from our f…
Post a Comment
Read more

- September 11, 2009
Hey everyone! Um, so, I finished a draft of the synopsis. Apparently, this is the purpose of them: Art of the Synoop
The Synopsis
I don't know who invented these damn things, but they're annoying. Prepare to be majorly spoiled.
On the other hand, I have a new idea floating around after finishing Time Traveler's Wife. Not time travel, but soul-swapping. As in, what would happen if what makes you you--personality, mental/ emotional patterns, intellect, etc.--was pushed out of your body into someone else's?

When Madeline Keegan’s father, a wealthy shipping merchant and scion of one of England’s aristocratic families, dies, he leaves a business, an estate and his fortune to his widow and his daughters—especially his two eldest, with whom Miles had a special relationship. Alexandra and Madeline are eight months apart in age, with different mothers and are different colo…
Post a Comment
Read more

- September 03, 2009
I've taken a step back from the book to write the blurb, synopsis and gain some perspective on the story itself before taking comments and diving back in with a flurry of writing. But I was thinking about something Sonal said--not to put you on the spot, my dear--about this one class she had, full of business majors. It was a writing class and the prof was attempting to get the students to talk about their work, analyze it--you know, critique and then revise. According to Sonal, it didn't really work out.

Which kind of made me feel bad for just throwing y'all into the deep end with this book. I know not everyone took writing classes--specifically fiction classes. Nor does everyone read fiction and a whole book in your lap is a weighty thing. Not to mention that it's been my dream since I was a little girl to have a book published...

My first workshop was the Columbia University high school writing program. I think I was going into junior year. I didn't really know …
Post a Comment
Read more
More posts