Showing posts from August, 2009
Show all

- August 29, 2009
I'm at this point--which I come to once in a while--of getting ahead of myself. By that, I mean that I have 4 million story ideas in my head and yet, let's remember that I haven't finished this one yet, officially. So I'm trying that whole writing down and doing some light research thing, just to get the ideas down and let them ferment for a while. I was thinking in my insomnia last night that I should blog about where the ideas come from, but truthfully, I don't know. I don't think the story ideas are anything particularly original; story ideas can be similar, but it's execution that counts and there are parts of this story that I can't judge the execution of yet. Still too close to parts of it. A writing teacher I had at Columbia's summer program told me, "Ideas are wonderful, but they don't get published." Heh.

But in the meantime, I'm writing a synopsis. I've discovered that I dislike them. I've already deleted one and …
Post a Comment
Read more

- August 24, 2009
I was doing one of those "Pick Your Five Favorite" lists on Facebook a few days ago. So I thought I'd give it a try. Plus, in case you are reading (in which case many thanks and you'll get your present roundabout holiday season), but are going "I don't know if it's actually good or not" because you're not a historical romance junkie,there are short excerpts included. They're mostly first chapters, alas and alack, but since most book contests want a partial manuscript (basically the first three chapters or so), that opening is pretty crucial.
My top five romance novels (with linked excerpts):

- August 18, 2009
I am shit at coming up with titles. Always have been, always will be. It's hard to come with that one essential slogan that encompasses your entire story and it was even harder when I didn't have an entire book to name.

I was calling the book The Barbadian Bride for a minute because Madeline, the heroine, is from Barbados and a lot of her inner conflict stems from her childhood there (more free, but also with her mother dying and plantations full of slaves) and her life since living in England. And, at the end, she becomes a bride. It's a play on Mary Jo Putney's The Bartered Bride.

But I'm not sure that it really fits the story as it is now.

I could call it something generic like Smashing the Rules (Mady is, as you will note, very into social rules), but is that particularly romantic? Or Love in a Spy's Arms. The Tide of Love. The Keegan Inheritance might work, since that's where a great chunk of conflict comes form. Plus, if I ever do get around to writin…
Post a Comment
Read more

What's the sound of one hand clapping?

Good. Lord. I didn't I was so stinkin' verbose.

So, my pretties, I'm uploading to MegaUpload the book itself. It's all tracked changed in red for your delight, just waiting to be read and ripped apart. I have it set to by author, so apparently, if you are so inclined, you, too, can crayon-via-Microsoft Word all over it and it'll show up in a different color up to eight people.

I'm also uploading my revision letter to myself on Google Docs. Try not to laugh, because it's so fiction class 101. What can I say? I learn at my own pace. This re…
4 comments
Read more 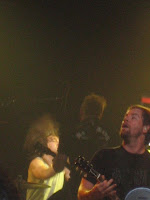 My favorite moments from the show:
#1 Kiss on the Neck
Making fun of his brother & "Lie"
Banter. David finds an olive onstage. Someone wants it. Digression ensues.
"Bar Ba Sol"
Continuation of the olive banter, booing of a dude wearing a Red Sox cap, "Come Back To Me"
"Light On"
"A Daily Anthem" last song of the night. Listen to the crowd sing. We were awesome.
Post a Comment
Read more

Almack's : Assembly rooms in London, where balls were held every Wednesday during the Season. Patronesses of Almack's determined who could come in and who could not. Anyone in trade, even aristocrats associated with trade, were not admitted.

Bath: A city in the southwest of England, located 13 miles southeast of Bristol, Bath is known for its natural hot springs. Very fashionable in the Regency era (Jane Austen lived there for a time).

bluestocking: A woman with unfashionably intellectual and literary tastes.

Bow Street Runner: Established in the 18th century, the Runners worked under the magistrate of Bow Street in London and were the first London police force. The Runners were detectives who pursued felons and cases across the country.

Bristol: A city in the Southwest of England, built on the Avon River, Bristol was one of the country's largest ports. In the 18th century, Bristol&…
Post a Comment
Read more

In the midst of revising

I was in the middle of Chapter Four late last night. I think I got up to the first time that Mady sees Henry before my eyes started drooping. But I finished reading Bury the Chains today, which will help me immensely.

Bury the Chains is about the British abolition movement in the late eighteenth to the early-to-mid nineteenth century, the only widespread abolition movement of its kind in Europe. I tagged it with Post-It strips while I read, green for general information (like about Quakers, who were early abolitionists or the effects of the French Revolution on Britain or how France banned slavery and then Napoleon reinstated it, the idiot) and orange for bits that I know I can use--like how slaves were treated on the island of Barbados, any ambience about Bristol, and how abolition societies sprung up or how black people lived in England at the time.

Which is all information I need. I had Mady join a ladies' abolition committee in the story, only to read that a) the internationa…
Post a Comment
Read more
More posts